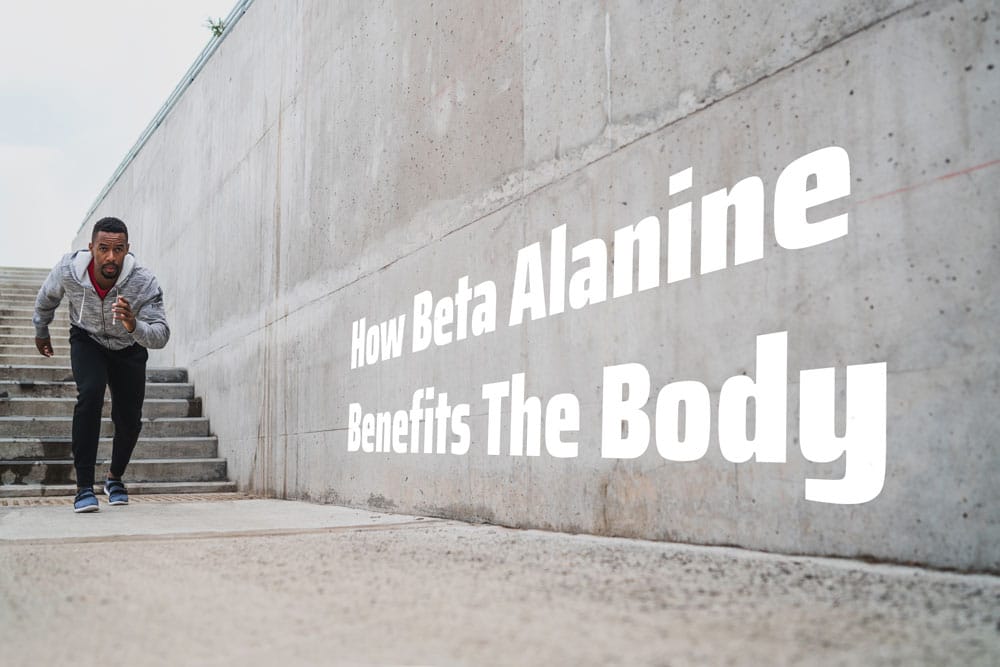 How Beta Alanine Benefits The Body

Known for assisting in improving sports performance and overall health, beta alanine is a supplement predominantly taken by athletes, the elderly and vegetarians. Why such a broad mix? Beta alanine is a highly versatile amino acid that has been proven to have a variety of health benefits. Let’s dive into this article and find out just how beta alanine benefits the body.

The products in this article are all available at highly affordable prices at the Supp Stop via our online store.

As mentioned above, beta-alanine is an amino acid. It naturally occurs in our bodies which means it is classed as a non-essential amino acid. However, this doesn’t mean that we can’t benefit from supplementing it into our diets.

It’s important to note that beta-alanine isn’t used to synthesize proteins in your body. It leaves that to most of the other amino acids. It teams up with histidine to produce a chemical called carnosine. For those who don’t know, carnosine is a compound that’s super effective when it comes to muscle endurance throughout high-intensity exercise and muscle building and increasing energy levels.

Beta-alanine supplements can help improve your athletic performance because they help create more carnosine within the body.

Your body’s natural levels of histidine are generally pretty high, while beta-alanine levels are usually on the low side. These two factors limit the production of carnosine.

We all know that lactic acid is not ideal when training. Because carnosine helps beat the effects of lactic acid build up in the muscles, beta-alanine supplements are a natural go-to for anyone needing a little athletic boost to their endurance. They’re a sure-fire way to beat fatigue, allowing you to train harder and faster and build more muscle in the process.

Again, this is because beta-alanine helps supplement lower levels of carnosine. Muscle fibres begin to deteriorate as the body ages, meaning physical movement and function also wear down.

Studies have shown that beta-alanine can improve muscle carnosine levels in elderly subjects, helping them improve their physical capabilities when it comes to athletic activities and getting around in general.

Source of Carnosine For Vegetarians

Our body may be able to produce carnosine naturally, however, this is usually at quite low levels compared to some other chemicals. Foods such as pork, beef, turkey and chicken all provide us with carnosine due to high levels in muscle tissues. Vegetarians and vegans obviously don’t eat these foods, so they generally have much lower carnosine levels than their meat-eating counterparts.

They may find that beta-alanine supplements can help boost their carnosine intake, increasing their energy levels, strength and endurance.

The name carnosine is derived from the root word “carn” which means “flesh”. This is in reference to how carnosine is found predominantly in animal protein (meat).

What Are Beta Alanine Tingles?

The only known side effect of taking beta-alanine supplements is a tingling sensation throughout the body. This tingling is called “paresthesia”, and the degree it is felt after beta-alanine consumption varies from person to person.

There are no harmful effects of paresthesia, it’s simply how the body reacts to increased levels of beta-alanine. When you feel the tingles, you know your body is ready to train hard and push itself to new limits with the help of increased carnosine.

If you’re not a fan of the beta-alanine tingles, you can try one of the following:

If you found this article helpful, you might want to check out our blog post about the benefits and uses of Garcinia Cambogia here!